Our new U.S. Secretary of the Interior Deb Haaland said “The bald eagle has always been considered a sacred species to American Indian people and similarly it’s sacred to our nation. The strong return of this treasured bird reminds us of our nation’s shared resilience and the importance of being responsible stewards of our lands and waters that bind us together.”

The bald eagle population has multiplied by 4.5 times since 2009!

We at Cardinal are lucky enough to have played a role – although the eagles really did all the work. Our newer nature preserve located where the Little Miami River meets the Ohio River is home to a special eagle couple, affectionately named Bonnie and Clyde by the birding community, that has nested there for years. These wonderful birds fledged a rare three-eaglet family the past two years and are currently preparing to lay another clutch of eggs.

As the only nest inside the city limits of Cincinnati, these eagles experience a wide variety of what the U.S. Fish and Wildlife Service would call disturbance. Airplanes and helicopters leaving and approaching Lunken Airport to offer what can be a deafening experience. Boats along the Ohio River as well as in the marina and the close proximity of the people that go with them are constantly within a range that in other places would be troublesome. However, these “city eagles” have found a way to cope and adapt to these surroundings in a way that no others have. Food is plentiful, so they put up with the noise. 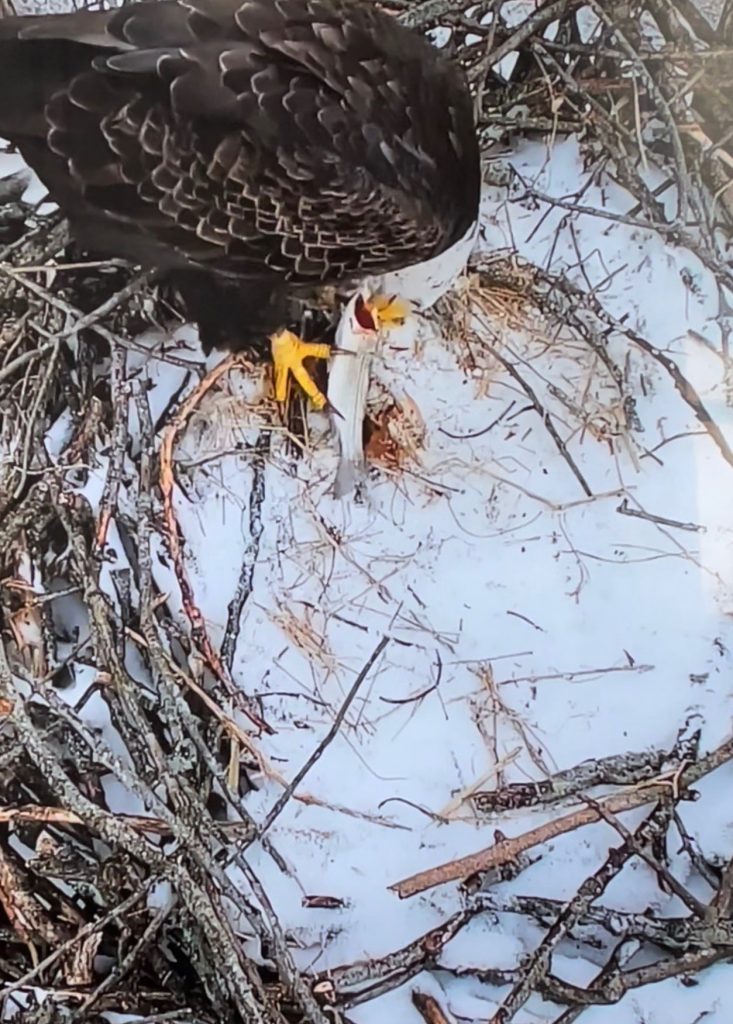 In Ohio, eagles begin their courtship in January or even earlier. Courtship can be as simple as perching next to each other or it can be seen as the eagles soar high in the air and then grab talons in a display that looks like fighting as they fall towards the earth – breaking away before getting hurt. Another form of courtship is by adding and adjusting the sticks in their nests. Eagles tend to keep the same mate year after year unless one happens to die, in which case they will generally find a new mate and build a new nest. We know that is the case with our eagles as one of the pair was found dead on the side of the road after being hit by a car five years ago. The remaining eagle found a new mate and they built a new nest about 300 yards away from the old nest. Their nests are incredible feats of building and can weigh 1,000 pounds!

Eggs are typically laid in February and March and they hatch after about a month and then they fledge or begin to leave the nest about 10-12 weeks later. Adults are easy to see with their white heads and whitetails. This feature doesn’t show up until the eagles are three to five years old and is a sign of sexual maturity. Once the young are able to fly, they might hang around for a couple of weeks to learn how to make it on their own, and then they’re off!

Eagles can be sensitive to human activities and we are taking precautions and following guidance from the USFWS. If you get a chance to visit our Little Miami Preserve, you’ll notice that the trail that goes near the eagle nest is closed during the nesting period. We will be working this off-season to put up a viewing blind that will be at a minimum of 100 yards away from the nest. We are also lucky enough to have been awarded a grant from the Duke Energy Foundation and Louise Taft Semple Foundation to place a live webcam pointed at the nest which was recently installed. Please look for our grand opening of the preserve in late spring where you too can go where eagles dare.